Home > News > What are the quality defects of aluminum alloy die-cast parts?

What are the quality defects of aluminum alloy die-cast parts?

As a special forming technology, pressure casting has been widely used in many industries and fields, especially for the mass production of automobiles, motorcycles, internal combustion engines, electronics, instrumentation and aerospace industries.

It refers to the holes and holes of different sizes appearing inside or on the surface of the die-casting aluminum parts. It has a smooth surface and is mostly round in shape. The generation of pores can lead to insufficient hardness of the die casting and affect the appearance of the surface.

There are many bolt holes, oil holes and various mounting holes on the die-cast aluminum alloy box, which directly affects the assembly quality and performance of the engine, and the quality of the die casting process needs to be strictly controlled.

When aluminum alloy is smelted, it is often found that a solid compound composed of heavy elements is deposited on a hearth, and such deposits are generally called slag. It is mainly composed of crystal grains of compounds containing aluminum, silicon and a large amount of iron, manganese, chromium, etc. at a certain temperature, and is pressed into the casting to form inclusions. These grains have a high melting point and a large specific gravity so that they are deposited on the hearth. Slag deposition can have detrimental consequences, such as the formation of hard spots in the die-casting aluminum tee to increase the moldability of the alloy and reduce the fluidity of the alloy. The slag formed by heavy metals is removed, and the main source of the other inclusions is oxide, which can be divided into primary oxides and secondary oxides.

It refers to the irregular shape of the hole in the thick section of the die casting, and the inner wall of the hole is rough. It can even lead to localized honeycomb structure in the die casting, which affects the strength of the casting. The product processing face is exposed. The outer surface of the die-cast aluminum alloy product has a relatively dense structure, and some small holes appear inside the workpiece due to the shrinkage phenomenon. If the processing amount exceeds the thickness of the dense layer, the hole will increase significantly. 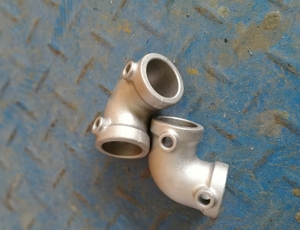 The base of the aluminum alloy die-casting part is broken or broken, forming an elongated slit (up to 5Omm in length, irregular shape such as linear or wavy pattern, and has a tendency to extend under the action of external force. This defect is called crack.