During the casting process, there are often problems with porosity, which brings a lot of trouble to the processing of the manhole cover. Porosity is the shortcoming of bubbles formed by the separated gas remaining in the ingot during the cooling and condensation of the metal liquid. The  Ductile iron manhole covers supplier will analyze the primary cause of the blowhole.

2. The pouring speed is too slow to fill the gate cup, expose the sprue, get in the air, and suck in the slag, forming the air hole and slag hole.

3. A large amount of gas and residues generated by the gasification and decomposition of the foam model cannot be discharged out of the mold in time. The dryness of the foam and paint layer filled with dry sand is poor. Surrounded by the high temperature of the liquid alloy, a large amount of hydrogen and oxygen are cracked into the cover The primary cause of stomata.

7. The pouring temperature is low, and the molten metal in the filling front cannot fully vaporize the foam, and the remaining undecomposed material can not float to the riser and condense in the manhole cover to form a gas hole.

8. Poor deoxidation of the molten steel, slag removal in the furnace table, furnace, and bag is not clean, the sedation time is too short, the slag retention is poor during the casting process, and the casting process is unreasonable to form slag holes.

9. The opening position of the inner runner is unreasonable, and it forms a dead zone when filling. Because of the gas pressure effect in the cavity, the gasification residue accumulates in the dead corner to form a gas hole. The cross-sectional area of the inner runner is too large, so that the filling speed is greater than Foam gasification gives way, swallows the foam, decomposes and gasifies inside the alloy, and the gas cannot be discharged to form pores.

10. The capacity of the gate cup is too small, and the metal liquid forms a vortex, which invades the air and generates pores. 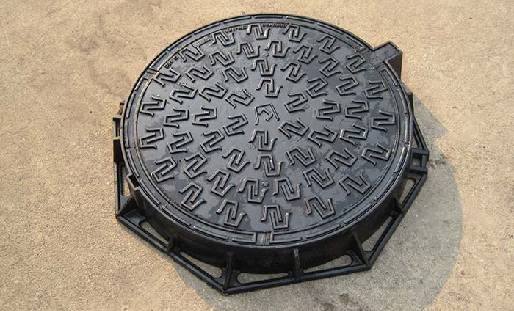 Precision casting high-speed coagulation method. A method to improve the directional coagulation rate. The difference with the PD method is that only a heat insulation baffle is installed at the lower part of the induction heating body, and a shell is added under the water-cooled chassis to cover the tissue so that the shell shape gradually moves down with the cooling bottom plate after the flex injection. Ductile iron manhole cover adopts this method has many advantages, it can increase the speed of processing, and improve the working power to a certain extent. The heat-insulated shelter blocks the radiant heat of the induction body so that the condensation area inside the mold shell is at a high temperature in the hot area, and the condensation area where the condensation shell is removed is in the cold area. The heat flow is removed by conduction through the water-cooled plate, and part of the heat flow After radiation, the heat is dissipated to the surroundings, and then the temperature gradient G value along the alloy condensation interface is improved by 2 times compared with the general PD method, and the R-value is improved by nearly 4 times. The quality and production power of the manhole cover are obviously improved, that is, the directional condensation blade is produced.