1. Short-flow casting of blast furnace hot metal directly added to the induction furnace. If ductile iron bench is produced, if there is no good high-temperature melting operation in the smelting, the casting shrinkage defect is easy to occur. Analyzing the reason, it is estimated that the thick flake graphite in the blast furnace molten iron in the original molten iron was not eliminated during the smelting. During the solidification process, the graphite was precipitated prematurely in the liquid state and caused by insufficient graphitization expansion in the late solidification period. A wind power foundry in Benxi area uses short-process production of wind power castings, all of which are scrapped with unqualified flaw detection, almost no qualified castings, and heavy losses are an example. The quality of hot metal in the blast furnace in Benxi area is very good, and the harmful trace elements are very low. The hot metal directly enters the low-heating induction furnace, and it is estimated that high temperature smelting is insufficient to refine graphite. The short-flow process of Jiangsu Jixin is that the blast furnace hot metal has been oxidized and burnt harmful elements through 30 tons of electric arc furnace. The smelting process has undergone high-temperature smelting, and the burned carbon has been treated with a carburizer to increase carbon. It is said that Benxi short process is very different in melting process.

2. When encountered in some foundries in Shandong and Henan, when producing small and medium ductile iron castings with uneven wall thickness, the thermal joints were separated throughout the casting, and the structural wall connecting the thermal joints was thinner. Various measures such as cold iron or The accelerated thermal joint cooling of chrome ore, controlling the pouring temperature, increasing the carbon equivalent, changing the pouring feeder system, etc., can not solve the requirements of X-ray inspection below level 2. When the carbon equivalent is reduced from 4.4-4.6% to 4.25-4.30%, the shrinkage is reduced and the flaw detection is qualified. Of course, some other auxiliary measures have also been taken. The reason for adopting this approach is because of the previous pipeline modeling, the production of ductile iron wheel hubs, and the experience gained from the production of individual hubs with discrete thermal joints, which is different from most other ductile iron wheel components that control higher carbon equivalents. This method can reduce the cause of shrinkage. It has not been clear. Is it related to what Zhou Qiming said in his article, delaying graphitization expansion and reducing primary graphite during solidification? The carbon equivalent of these ductile iron castings is selected to be lower than the eutectic point. Although graphite is precipitated during the early solidification, the amount is small. The austenite dendrite mainly precipitates first, leaving more graphite for the later eutectic solidification Reduce the amount of swelling, so fewer shrinkage defects. Is it also a process method to delay the expansion of graphitization? 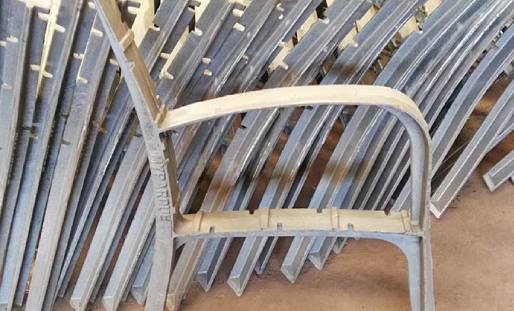 3. The above-mentioned method of controlling the composition of ductile iron parts with lower carbon equivalents and solving the shrinkage problem was approved by a well-known domestic casting expert in January this year. He said: In German foundries, carbon equivalent is selected in this way, while China generally chooses high carbon equivalent.

4. Large-scale wind power pouring, 1320-1340 degrees pouring, strengthen the final breeding, about 15-16 tons of molten iron pouring time of 80-90 seconds, capable of producing UT inspection qualified thick-walled nodular iron castings. However, the pouring temperature is increased to 1360-1380 degrees, the pouring time is more than 300 seconds, the use of cold iron and fewer risers can also produce qualified wind power castings. Here are the starting points for different processes for shrinking ductile iron. Of course, there is no detailed description of the respective pouring feeder and cold iron process. The main reason is it possible to have a similar relationship with the next casting process?

5.In the early days of China, when the machine tool accessory industry cast chuck bodies of various sizes (the diameter of the disc body was from 100 mm to 1000 mm), the material was gray iron 300 without any riser, but with a small inner gate. , Disperse uniformly into the cavity, long pouring speed, and achieve defect-free high-quality casting production. (In the year, more than 300 cups of molten iron were smelted with cupola).