Local pitting defects of nodular cast iron parts generally appear at the concave corners of the upper surface of the casting and consist of many pits. The shape of the pit is a circular or irregular polygon, and its diameter is mostly between 1 and 3 mm. Gray oxides remain in many places on the pit wall, and graphite is not in the form of spheres but in the form of fine flakes or dots near the pits.

There are three types of molding sand used in the custom cast iron bench leg factory's production, namely wet molding sand for small molding machine molding, wet molding sand for semi-automatic molding line (FBM) and self-hardening resin sand for resin sand production line. After analysis, it is found that local pitting defects mostly occur on castings produced by FBM production lines, and castings produced by small machine modeling rarely show such defects, even if they are relatively light, and such defects are found on resin sand castings. Never appeared. Obviously, this phenomenon indicates that the local pitting defects are related to the molding sand used in the casting. 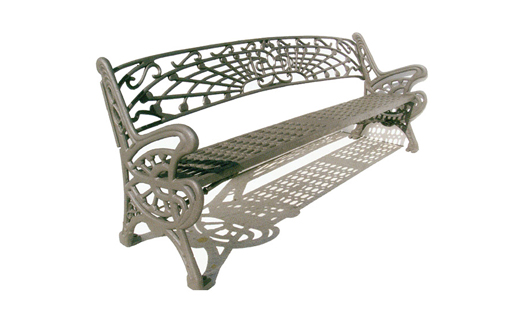 According to the above analysis, it can be speculated that the formation process of local pitting defects in the casting is roughly as follows: the liquid slag remaining in the molten iron and various metal oxides continue to float after the molten iron enters the mold, and finally the concave angle on the upper surface Obstructed everywhere and stay here. Here, liquid slag solidifies to form slag holes. Various basic metal oxides react with acidic substances in the molding sand under the action of high temperature, and the reaction products form defects such as slag holes and pores. In addition, the concave corner of the foundry outdoor bench chair leg is the sharp corner of the sand mold, which is surrounded by the molten iron, and is most seriously heated. Under the action of high temperature, the low melting point material on the surface of the sand mold melts, which increases the distance between the sand particles, and the molten iron enters, thereby forming hot sticky sand defects. Together, these defects form a local tingling surface here.

According to the cause of local tingling surface, 2 preventive measures have been taken in production:

① Reinforce the molding sand to improve its fire resistance and make its pH less than 7;

After the above two measures were taken, local pitting defects in the castings were effectively controlled, indicating that our analysis of the causes of such defects was correct, and the preventive measures taken were also effective.