Do You Know Ductile Iron?

Ductile iron is a high-strength cast iron material developed in the 1950s. Its comprehensive performance is close to that of steel. It is based on its excellent properties that it has been successfully used to cast some complex forces, strength, toughness and wear resistance. Highly demanding parts. Ductile iron has rapidly developed into a cast iron material that is widely used after gray cast iron. The so-called "steel instead of steel" mainly refers to ductile iron.

The chemical composition of nodular cast iron other than iron is usually: carbon content of 3.0 to 4.0%, silicon content of 1.8 to 3.2%, total content of manganese, phosphorus, sulfur does not exceed 3.0% and an appropriate amount of rare earth, magnesium and other nodular elements.

In 1981, Chinese ductile iron experts used modern scientific methods to study 513 unearthed pieces of ancient Han and Wei iron, and it was concluded from a large amount of data that nodular graphite cast iron appeared in China in the Han Dynasty. Relevant papers were read out at the 18th World Congress of History of Science and Technology, which made a splash in the international foundry and history of science and technology. International metallurgical history experts verified this in 1987 and believed that this was of great significance to re-stage the world metallurgical history.

By the 1920s. Due to the research on the effects of carbon, silicon and other main components in cast iron, the effects of adding other alloying elements, melting methods, and inoculation effects, the so-called high-grade cast iron has appeared. Therefore, the material has been considerably improved, and the scope of application has been expanded to a certain extent. However, due to the fundamental shortcomings of low toughness, it has not been possible to rapidly expand its scope of application.

In 1947, Morrogh of Smoke discovered cast iron with spheroidal graphite in its as-cast condition.

During the Second World War, due to the lack of resources of the chromium element necessary for the production of wear-resistant martensitic white cast iron, the study of alternative elements of Cr became an urgent task. Therefore, for various metals and transition metals that chemically combine with carbon, a systematic investigation has been conducted on whether they can form carbides, including magnesium. In order to slow down the intense splashing when magnesium is added, Cu80-Mg20 alloy and Ni80-M920 alloy have been used. The results show that magnesium not only has a good effect as a substitute element of chromium, but also found that when magnesium has a certain amount of residual amount in the molten iron, it has a significant desulfurization effect. Based on these new findings, the role of magnesium in grey cast iron has also been studied after white cast iron. Adding 0.5% Mg to gray cast iron containing C 3.5%, Si2.25% and Ni 2%, the tensile strength is far beyond the original expectations (common gray cast iron is about 13kgf / mm2), up to 78kgf / mm2 .

We are a supplier of ductile iron parts. We provide high quality ductile iron benches and ductile iron flower pots. If you are interested in our products, please feel free to contact us . 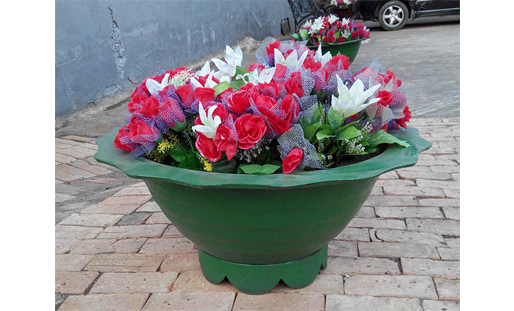