Ductile iron manhole covers are a type of ductile iron products. Spheroidal graphite is obtained by spheroidizing and inoculating treatment, which effectively improves the mechanical properties of cast iron, especially plasticity and toughness, so as to obtain higher strength than carbon steel. Ductile iron is a high-strength cast iron material developed in the 1950s. Its comprehensive performance is close to that of steel. It is based on its excellent properties that it has been successfully used to cast some complex forces, strength, toughness and wear resistance. Highly demanding parts. Ductile iron has rapidly developed into a cast iron material that is widely used after gray cast iron. The so-called "steel instead of steel" mainly refers to ductile iron.

In the countryside and cable wells, squares are generally used, which can better prevent the entry of liquids such as rainwater. 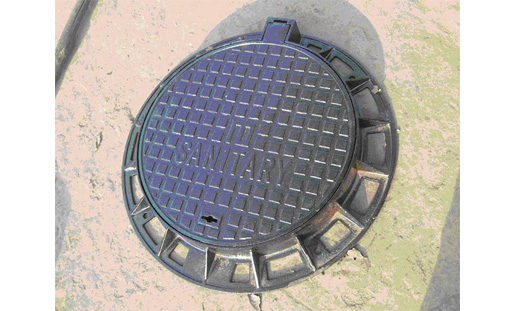 Pig iron is an iron-carbon alloy with a carbon content of more than 2%. Industrial pig iron generally has a carbon content of 2.5% -4%, and contains elements such as C, SI, Mn, S, and P. It is smelted by iron ore in a blast furnace. product. According to the different forms of carbon in pig iron, it can be divided into steelmaking pig iron, cast pig iron and ductile iron.

The precipitated graphite is spherical cast iron. Spheroidal graphite has a smaller cracking effect on the metal substrate than flake graphite, making the strength of cast iron reach 70 to 90% of the strength of the matrix structure, the tensile strength can reach 120kgf / mm2, and it has good toughness. The chemical composition of nodular cast iron from custom cast iron bench leg factory other than iron is usually: carbon content of 3.6 to 3.8%, silicon content of 2.0 to 3.0%, manganese, phosphorus, sulfur total content of not more than 1.5%, and appropriate amounts of rare earth, magnesium and other nodulizing agents.