Problems in the Construction of Nodular Cast Iron Manhole Cover

A ductile iron manhole cover is a kind of ductile iron products, ductile iron through spheroidization and inoculation treatment to get spherical graphite, effectively improve the mechanical properties of cast iron, especially improve the plasticity and toughness, so as to get higher strength than carbon steel. Nodular cast iron has been rapidly developed into the second most widely used cast iron material after gray cast iron. The so-called "iron instead of steel" mainly refers to ductile iron.

Ductile iron manhole cover in the construction process, if there is no correct method, then it is easy to have some problems, these problems if not properly handled, it is likely to be in the future use of the process of decline, so today Ductile Iron Manhole Covers Supplier will give you a simple introduction:

First general municipal road building to a certain height, then filling roadbed, this situation leads to large mechanical compaction can't around the wellbore, and had to take a small artificial ramming tamping machine, inevitable formation compaction corner around the nodular cast iron manhole covers such compaction method is feasible in theory, but actually due to large people's conceptions, consolidate the results are often unsatisfactory. 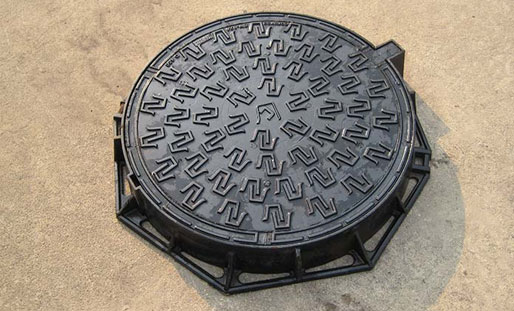 Generally by the low strength of mortar masonry, and masonry mortar is also low strength, coupled with workers masonry mortar is not full, after the completion of the lack of scientific testing means, its own strength does not have good durability. Part of the inspection after the first construction of the nodular cast iron manhole cover behind the pouring of the concrete floor caused by the wrong practice. This construction method makes it directly located on the soil foundation, the foundation is not firm, the concrete floor does not play the role of diffusion stress, under the repeated load of vehicles under the well is easy to sink.

The ductile iron manhole covers were improperly designed and fitted. Ductile iron now used mainly in municipal engineering. This product is nodular graphite made from ductile iron by spheroidization and inoculation treatment, which effectively improves the mechanical properties of cast iron, especially plasticity and toughness, thus resulting in higher strength than carbon steel. Therefore, the material itself does not have any problems, and it is also found that there is basically no fracture phenomenon in practice, but the key is that the width of the well seat is generally only 40~60mm wide, which cannot effectively spread the vehicle load.

Ductile iron manhole cover in the construction, in addition to the above prone to problems, may also encounter other situations, this time we need to be able to find out in time, if you have any difficulties in the future, you can find a special person to consult, in order to better construction.